‘The Regulators’ Paddle Temagami – Part One

The idea for a canoe trip in Temagami came about when B and I planned our first annual Map & Flap on Family Day weekend at the hunting camp we used to live in. The plan was for everyone to propose a canoe route to the group and the routes would be voted on.

I took this idea very seriously; in fact I put together a powerpoint presentation and borrowed a projector from work. My efforts paid off when the group unanimously voted for my ‘Save Wolf Lake – Temagami’ route. 15 slides long, I went through the significance of my route, mainly around Wolf Lake as it is surrounded by the world’s largest known contiguous ancient red pine forest. I also informed the group that Wolf Lake remains continually at risk because it is designated as holding “forest reserve” status, which prohibits logging but not mineral exploration or mining. For more information, please visit www.savewolflake.org.

There was definitely urgency to my route and seeing these ancient red pines before it’s too late.

A group of 10 paddlers eventually turned into 5. My friend “First Trip” had never been on a backcountry trip before and I have been asking her for YEARS. Finally, she was able to get the time off work. She needed a canoe partner though. This didn’t happen and 2 weeks before the trip we decided that First Trip was going to join us in a kayak (thanks for letting us borrow your kayak, Nick!). What a trooper! Not only was this her first trip (hence her trail name), but she also did it solo! So, the Temagami trip was going full steam ahead with 2 canoes and a kayak (#twocanoesandakayak).

Our group name ‘The Regulators’ (mount up!) was inspired by the film Young Guns, and each of us earned our trail name over the course of our 8-day canoe trip. Let me introduce you to our group of 5:

Spirits were at an all-time high when everyone showed up in Muskoka the night before departure. We had gear spread out everywhere, food barrels to pack and so much to catch up on. Our plan was to depart by 6am and stop for a late breakfast at Kate’s Kountry Kitchen near Markstay-Warren on the Trans Canada Highway. Someone recommended this place for their breakfast and coconut cream pie.

We rolled in around 10am and split a piece of pie before breakfast. It was delish! The young waitress was fun, the food was awesome and the place filled up fast. You know it’s good when the parking lot is full.

We didn’t have far to go to reach Kukagami Road where we would get a shuttle from the Sportsman Lodge to Matagamasi Lake. We decided to park our 3 vehicles there, and pay for shuttle and launching fees because of the vandalism to cars parked at the Matagamasi access point that I had read about. Plus, we were coming back through Kukagami Lake. It was way more expensive than I had initially planned based on the information on their website, but it was too late now. And, the owner wasn’t overly friendly.

We were dropped off at noon at the Matagamasi access point in the rain. We loaded up our #twocanoesandakayak and started paddling the lake. The plan was to get a site in the north arm. There were a few other sites taken on this lake, but we had no problem finding one for ourselves.

Every year I try to up the ante of our canoe trips. It’s all about learning and gaining more skills. This route was all on crown land, so there were no permits to buy, no designated portages or campsites. Sure we took a risk in not being able to get a campsite because it’s a busy route, but we didn’t run into any problems. My map reading skills were put to good use as I navigated us to unmaintained portages and unmarked campsites. I’m proud of myself!

The first site was great. Plenty of room for 3 tents, a good fire pit and it had a thunderbox in good shape. I was shocked about the cleanliness of the site. I was expecting it to have broken glass and garbage lying around. We set up 2 tarps because the rain didn’t let up all day until around 6pm.

We had black bean chilli (with dark chocolate) and Fritos for dinner, and had an early night.

We woke up the next morning to a break in the clouds. An awesome day for paddling! We had plans to camp on Wolf Lake our second night with a stop at Paradise Lagoon. 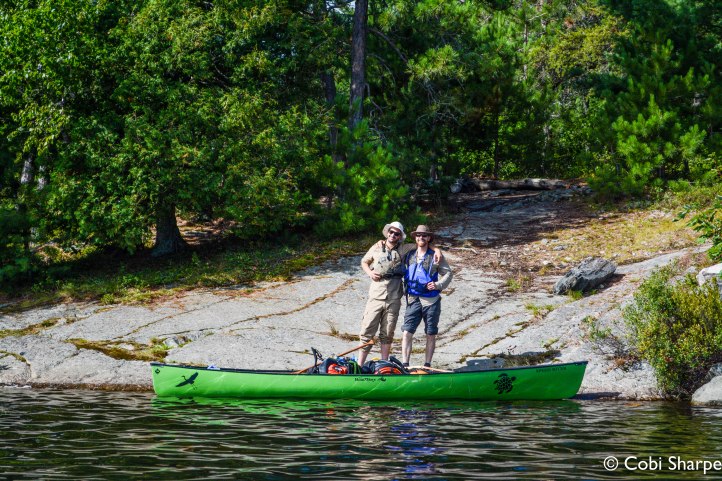 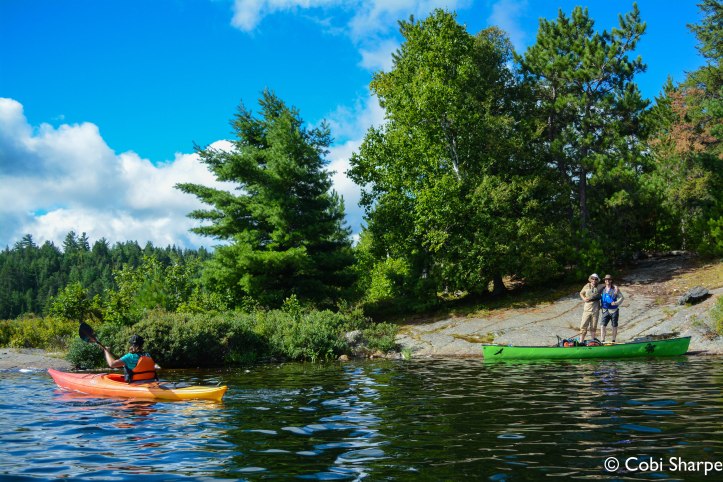 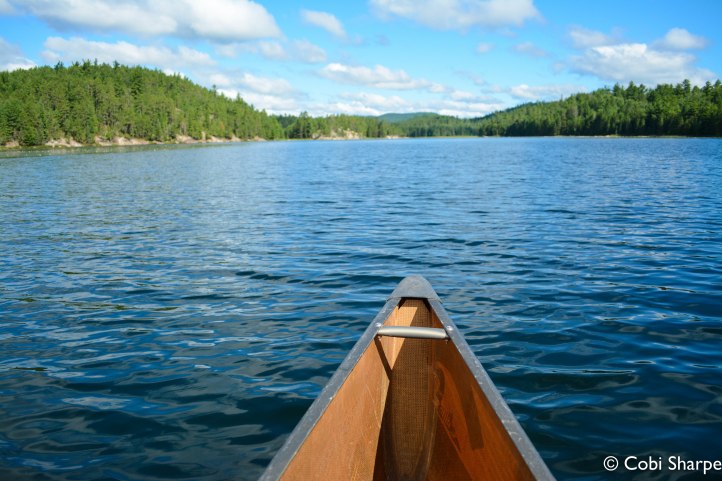 The first portage was in great condition and I was surprised at how clean it was. On the other side at the put-in the water was turquoise! So beautiful. 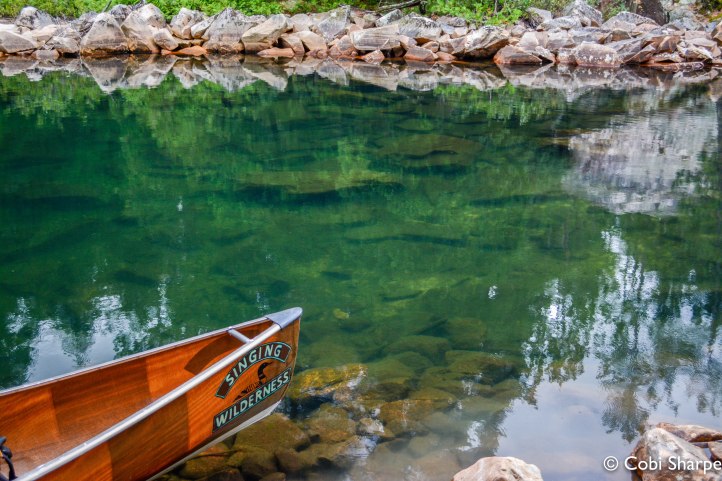 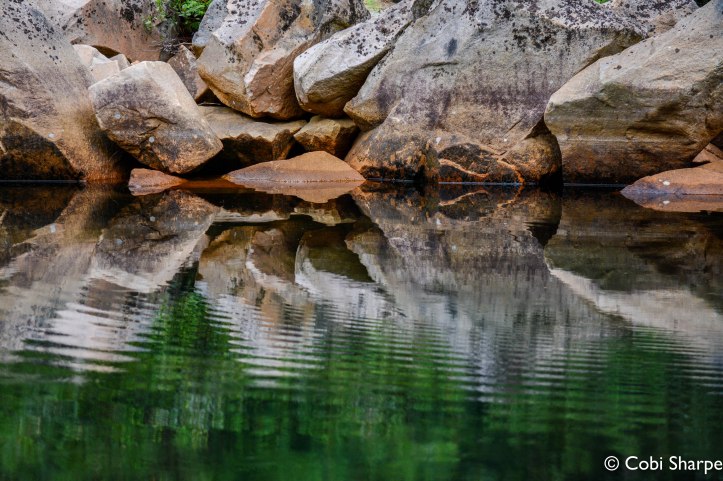 We had a short paddle to the ‘Toenail’ portage. I can see why. You’re basically climbing up boulders most of the way. There are a couple of dicey spots, like walking along a cliff, but it was manageable. We portaged all our gear to the put-in on Sylvester Lake, and backtracked to see how we could get into Paradise Lagoon. 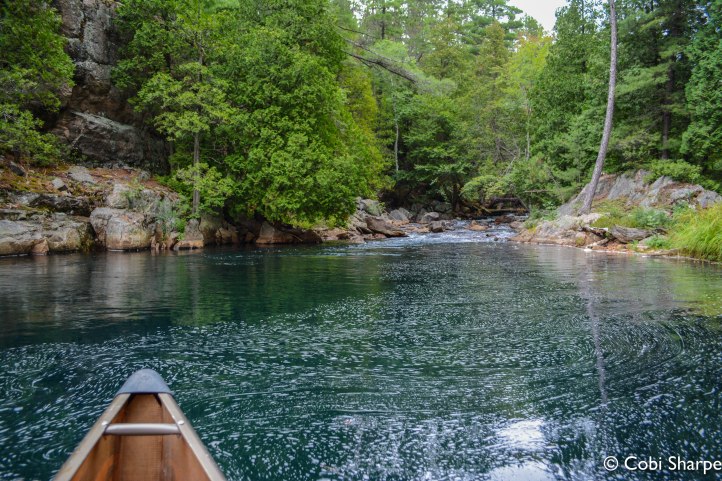 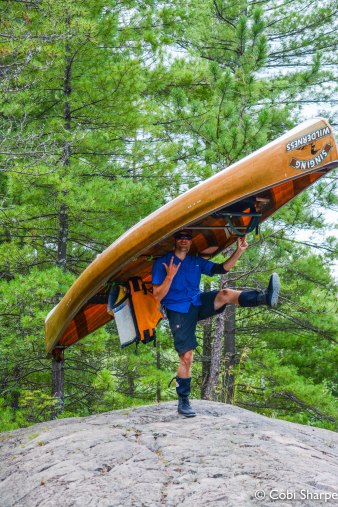 You have to scramble over a logjam, and then you can see a trail down to the lagoon. 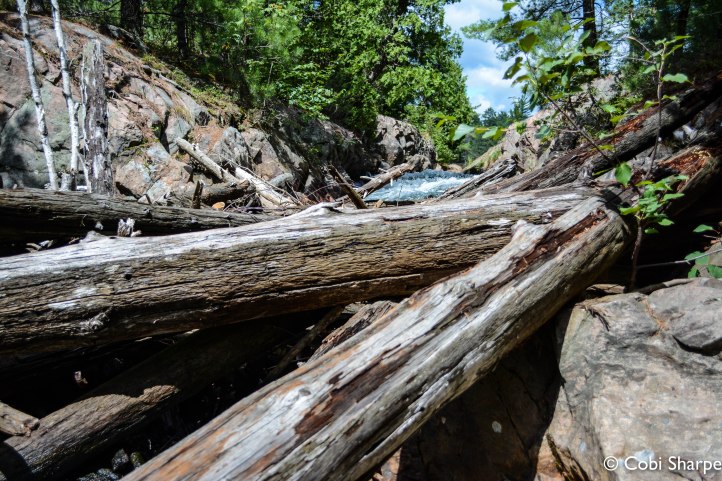 There were lots of people here, because it is accessible by road, and then I would imagine a trail to follow. Teenagers were drinking beer out of bottles and there was broken glass around, but ignoring that, the lagoon was paradise! What an awesome place to swim and explore!

Between portaging, we stopped for a swim at Paradise Lagoon. 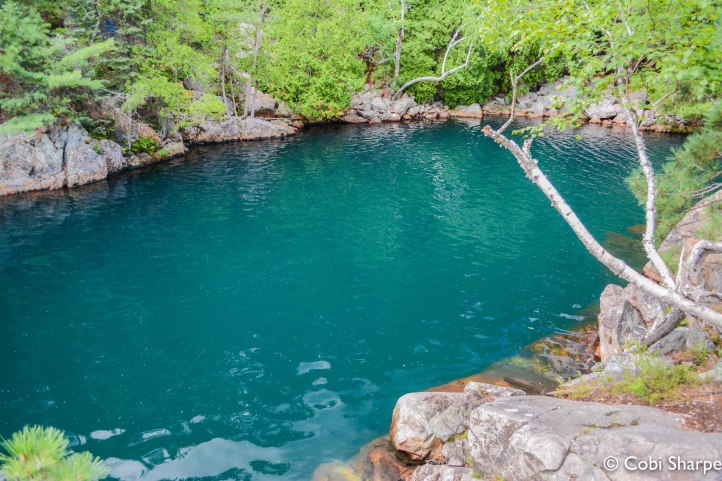 We spent some time here swimming and having lunch and then went back to our gear and headed off for a campsite on Wolf Lake I was hoping for. The whole area is absolutely stunning. Rusty rim on the rocks around the lake, quartize, large hills and turquoise water. It is very similar to Killarney but has more of a wilderness feel to it.

Paddling up the swift from Sylvester Lake into Wolf Lake

No one was at the campsite I wanted, I couldn’t believe it! We had an awesome view down the lake, and we could climb up the ridge behind us to a lookout over Wolf Lake. We made it up there for sunset, and it was breathtaking. Absolutely mind-blowing. What a special place!

Watching the sun set over Wolf Lake and the Temagami wilderness. 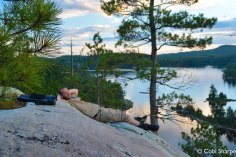 Thank you so much for reading! Please contact me if you have any questions.