The Year We Lived in a Cabin – Final Part

When we returned from our 4-week honeymoon backpacking around Europe we had a few things to consider regarding upgrades to the T.S. before winter arrived. All summer I had noticed critters getting in through the soffits and there was no insulation under the floor.

We hired someone to come up to the T.S. and spray foam all of the exposed floor on the exterior of the camp. That would help to keep the heat in that we worked hard all summer to get ready (choppin’ wood).

We also thought about adding an addition to the T.S. I didn’t like the idea of the door opening directly to the elements with us being located on a hill. A little extra storage space wouldn’t be a bad thing either. So we bought all the materials and my husband and father-in-law spent a weekend putting it together.

We also decided to replace the wood stove that was in there because it wasn’t very efficient and was too big for the small space. Buying a wood stove has been one of the most exciting purchases of my life!

After the addition, spray foam insulation and wood stove we were pretty much maxed out when it came to finances so laid pretty low for a while. We also decided to get a cat to help with mouse problems because fall is the time of year when they really start trying to get into, and nest, in the T.S.

Fall and winter was such a wonderful time to be living at the T.S. Christmas was especially wonderful. I had changed things around inside once the addition was built and we could move a few things out into that space for storage. 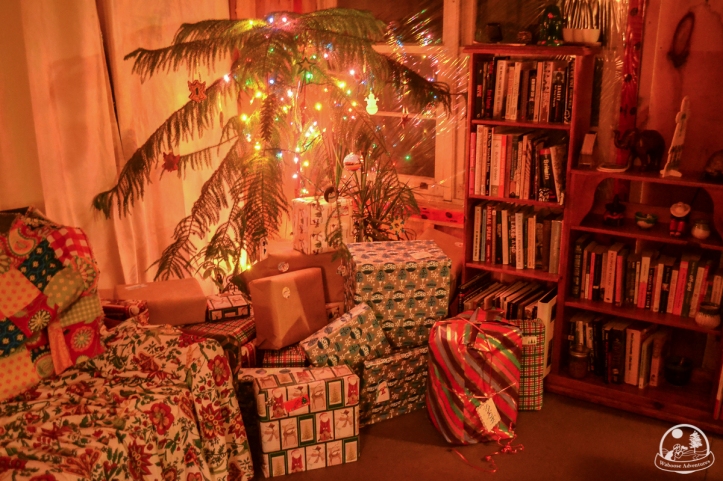 Just before Christmas however, I received some not-so-good news. I was being laid off from the environmental non-profit I had been working for for the past 5 years. It was the year Stephen Harper was elected in 2011 and one of the first things he did was cut the Natural Resources Canada ecoENERGY Retrofit – Homes program. I coordinated that program for a few years. With the end of that program came the end of my job. It was bittersweet. I had never worked somewhere for that long and really built a lot of working relationships. I was really going to miss it there, but at the same time I was excited to have some time off and figure out what I wanted to do next with my life.

I spent time feeding the wood stove and keeping Pickles and I warm during the day and watching the birds. 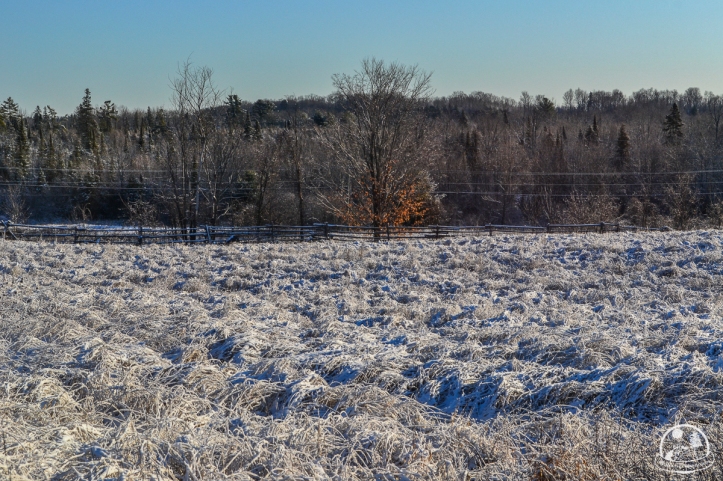 Life was simple and slow at the T.S. Every so often we would have to gather more water from the spring-fed ponds that never froze over. We put two rain barrels in the upstairs of the camp to gravity feed water down to the tap. This worked out well because the water would never freeze being inside the T.S.

I also spent a lot of time during this particular winter working my ass off outside with my father-in-law clearing out an old apple orchard on the farm in hopes that we could get new fruit to produce in the summer. He did the chainsawing and I created the brush piles. It felt good to be working outside and it was such a drastic change from sitting at a desk all day. 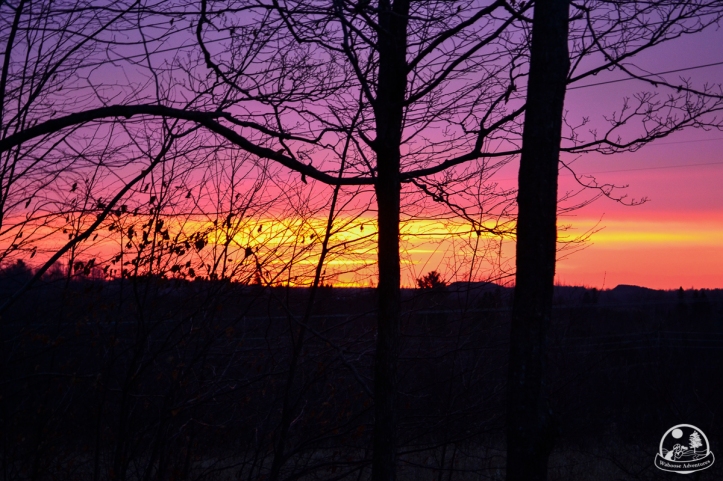 When early spring rolled around I tapped trees and helped my brother-in-law make maple syrup.

We had been listening to the news during this time and Stephen Harper was up to no good again. He wanted to cut the Environmental Assessment Act. At the time, my husband was an Environmental Assessment Officer for Parks Canada, and we both knew that this was bad news for us. We had already been dealing with our direct hit from the Conservatives cutting funding for the ecoENERGY Retrofit – Homes program (a program that offered grants to homeowners who made their homes more energy efficient – new furnace, insulation, air sealing, windows, etc) when I lost my job and now my husband’s was in jeopardy.

All of a sudden, we didn’t feel like we could work in Ontario anymore. We were both working in the environmental sector and there was no way we could find a job with a prime minister that didn’t give a shit about the environment. We had to think fast. His position was going to be terminated and within a month of him being laid off, we had to look elsewhere in Canada for employment. First my husband was offered a job in Saskatoon as a junior biologist and I was just about to sign lease papers for an apartment when another call came in from the Yukon.

Within two weeks of being offered a job in the Yukon, we had sold most of our belongings, packed the rest up into storage in the barn, moved out of the T.S. and took only a few things with us as we drove across Canada for a new and exciting life experience up north.

After living in the Yukon for a while, our life plans changed drastically and our dream of building a mortgage-free home and living in the T.S. diminished. I always wonder what life would be like for us if Stephen Harper didn’t get elected. Would we have built our home? We most definitely wouldn’t have traveled to the Yukon.

I look back at that time in our life with fond memories though. It was amazing to work hard and spend that first year of our marriage working toward something together. I had a lot of fun playing radical homemaker.

And to be honest, it was hard to go back to the T.S. when we moved back to Ontario. I had mixed emotions about it. It was a place that we worked so hard on. I now realize how lucky we are to still have that hunting camp in our lives and that we have the opportunity to go there whenever we want. Over the past two years we have been hosting a Map & Flap weekend (No. 1 and No. 2). It’s a weekend filled with outdoor winter activities with friends and an opportunity to propose canoe trips for the following year. We have taken this quite seriously with power point presentations, prizes and cocktails. Lots of cocktails. It’s so much fun and I so look forward to this time in the camp and with friends every February.

I appreciate you following along. I think it’s so hard for people my age (mid thirties) or younger to get a start in life when it comes to owning a home or settling down. With school debt and living expenses it’s almost impossible to save for a down payment. Some times it takes creative thinking, like living in a T.S. to help us along. If anything, it makes for a great story!